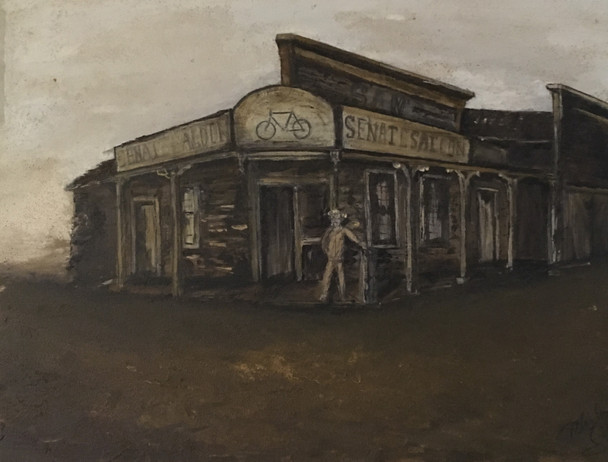 Michael Silbaugh "Sam's Senate Saloon painting is a rendering of a vintage historical photo taken of Senate Saloon from the late 1800's in Santa Cruz CA, by an unknown photographer. This painting is framed.
I was able to get a copy of the original photograph in the 70's from the Santa Cruz Historical Museum. On the back of the original photograph the location written is Senate Saloon, Sam Alkire, prop., 321 Soquel Ave SC. (address from: http://www.sfgenealogy.org/santacruz/szdir07/szdir07l.htm)
Sign over main entrance "Sam's Wheelman Rest" taking advantage of the bicycle craze of 1890s.

"Billy the Barber" struck a dapper pose outside Sam's Senate Saloon at Porter Street and the highway known these days as Soquel Drive. The saloon was one of several bars in the village where a patron might try to "soak his boots" for a shot of whiskey."*

Story: "Pioneer era who tried to hock his footwear for a pint of whiskey at a local saloon.
He asked the proprietor if he could "soak his boots." When the saloon keeper grumbled, "You go and soak hell," the reaction tickled the bar patrons so much they applied the name of Soquel to the saloon". So that's the telling of how Soquel got it's name "soak hell" to "Soquel" once the patron drowned in the whiskey. By Carolyn Swift - former Director, Capitola Hi

To purchase various print edition and other product with this image of just click on the BY NOW button:

MSRP:
Now: $3,200.00
Was:
Village of Pahoa, Hawaii This Hawaii painting depicting the way the town of Pahoa, Hawaii looked at night while Kilauea volcano was erupting, 2018. A oil by artist Michael Silbaugh. To purchase...

MSRP:
Now: $4,750.00
Was:
"Jones Blacksmith Shop" oil painting by Michael Silbaugh of a blacksmith shop circa 1800's Santa Cruz, Ca. somewhere on Soquel ave, in the Seabright area. Could be the building that Ace Appliance...

MSRP:
Now: $5,000.00
Was:
"Aina(land)of Leilani" Kilauea eruption hanged life for those impacted by this unprecedented eruption, and explore the challenges and changes ahead as the island faces an uncertain future. In a...

MSRP:
Now: $3,500.00
Was:
Cold Spring Tavern painting by Michael Silbaugh. The Tavern is situated high up on San Marcos pass on the Santa Ynes valley side of Los Padres Nation Forest just over the summit to the left before...

MSRP:
Now: $990.00
Was: $1,500.00
"E ola i ka 'aino o Kilauea" painting rendering depicts the flow of lava as it destroys the rainforest paradise of Puna along the beaches of Hawaii. Because of the panorama of the rendering...

MSRP:
Now: $12,000.00
Was:
"Yellowstone Falls and Canyon" tells us a tale of a boy who went fishing in Yellowstone Canyon above the falls. That boy was me, who failed to listen to my father to follow his steps closely went we...